Collecting antique radio and other electronic equipment is a fun and interesting pastime that appeals to a variety of folks from the pure collectors who are looking for their next great find, to the technicians and tinkerers who like to restore the electronics or refinish cabinets, to the historians and preservationists interested in the history of the technology, to those who are into it as a small business. Many involved dabble in several of these areas. All enjoy the camaraderie of a shared interest. You will find antique radio, TV, hi-fi, electrical instrument, vacuum tube, and electronic test equipment collectors to be a friendly and honest group that do not take themselves too seriously, while recognizing they are preserving a part of our heritage. 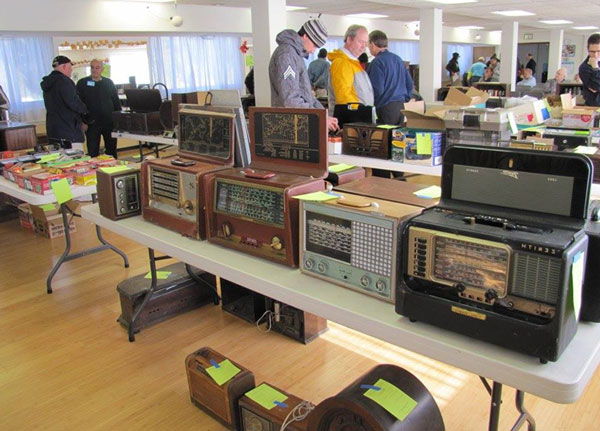 A look back by Joe Koester

The Mid-Atlantic Antique radio Club celebrates its 10th birthday this month (June, 1994). Like the old cigarette commercial, we've come a long way, baby. It took a lot of hard work and effort to achieve what we have all done with this club, and we can be rightly proud of our efforts. We had no club, confederation, or group of radio collectors in the Baltimore-Washington area before 1984. I understand that a few people in northern Virginia tried to meet to create a club sometime before MAARC formed, but it never got off the ground. Prior to the formation of MAARC, some of us knew of a few others with similar interests, but we never managed to get more than one of two others together at a time.

Ted Hannah had I worked for the same agency and had been "radio buddies" for about five years when we got the idea of sending out a letter to those few we knew of who shared our common interest. I can clearly remember that June day in 1984 when we were walking across the parking lot at work and we agreed to try to get a group going. Between us, we knew of 22 people who had some degree of involvement in antique radios and we sent out an invitation on June 15th, 1984, for these persons to meet at my home in Laurel, MD, on Saturday evening, July 14th. Fifteen of those 22 attended the initial meeting. I can't recall the names of all those who attended our first meeting, and at the risk of failing to mention some, I'll list the names of those I remember: At this first meeting we agreed to form a club and chose the current name, although the Chesapeake Antique Radio Society (CARS) was a close second, and the DelMarVa (Delaware Maryland Virginia) Antique Radio Club was a distant third! We elected Joe Koester as president, Brian Belanger as Membership Chair, and Ted Hannah as Recording Secretary. Dwight Heasty recalls that about 12 of the 15 attending initially chose to join the new MAARC.

We had 25 people in attendance at our second meeting on August 17th, and had our very first presentation - and show and tell.

Ken McIntosh gave a presentation on "The Evolution of Television," while Ed Bruns introduced Ed Kennedy, a relative of the late Colin P. Kennedy, a pioneer manufacturer of quality radios.

Ted Hannah brought his 1923 Kennedy Model V for display, and Dwight Heasty showed off his rare Crosley Pup statue. Gerry Scheider volunteered to serve as club Treasurer (we had very little money to manage in those days), and Ray Thompson had the largest ad thus far in our fledgling Newsletter. By the third meeting, on September 22nd, we had 22 members in attendance (from a total of 40), and in October 23rd had 40 members attend the last meeting in the Koester family room where, like the hermit crab, we had outgrown the shell. November was our first Swapfest and Show in the Laurel Center Mall, and we grew to 55 members by the year's end. The rest of our growth is history: 106 members the first year, 206 the second, 307 the third year, and the numbers continued to increase.

A few reflections on the major contributors in the early years. First off, from day one is Kathy Koester. She welcomed her husband's group, served refreshments, cleaned the house, and typed all the monthly Newsletters up through the December 1985 issue. Speaking of the Newsletter, Jon Cohen gave us a new professional look starting in January 1986, a look that continued through the life of the old blue bomber (May 1994). Ted Hannah was always there, and probably edited 10 jillion words for all but the very earliest newsletters.

Although he never served as a director, he provided wisdom, guidance, advice, and counsel when needed. Brian Belanger drew upon his vast reserve of tact to steer us toward a group effort in making MAARC a much more smoothly run organization. Gerry Schneider expanded a great deal of effort getting us on a sound financial footing and helping us steer a proper course. Who can say enough about Ed Lyon, our historian, teacher technical genius, good friend, and host of our annual picnic. There isn't enough room to thank all those who put us where we are today, so please forgive me if you were overlooked.

MAARC was built with the idea of sharing knowledge to further the ideals set forth in our earliest meetings and constitution. We continue to support those ideas and help to help one another, and that's the secret of our success.

We make it an interesting and worthwhile organization to belong to, with meetings you want to attend and a great Newsletter you look forward to receiving. None of that has changed, except to get better and better. We continue to expend much of our energies and resources in our Newsletter and it shows. Steve Snyderman's idea and Lloyd Kendall's negotiations brought us the new Radio Age, one of many of our second President's contributions. MAARC entered a new era with the premier edition of our new Radio Age Newsletter, a splendid way to our second decade. Look for more of this innovative leadership in our hobby, and I can't begin to imagine where we'll be in 10 short years!